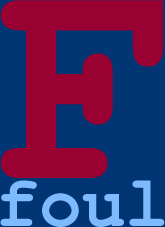 Freshman year at Illinois State University. I redefined myself. Wasn’t the first time I built my image, but the previous time, I fell into myself. No control. This time, I was in charge.

Smart, taking literature courses, I read Kerouac, Ginsberg, men of words. An intellectual, or I thought so — attending poetry readings, art shows and other gatherings of the bright and cultured.

But I grew up on the south side of Chicago. So south that I was actually in the suburbs. There, we had foul mouths. The F-bomb, selectively dropped, gave us a class and style among our dumber brethren who could only use the more guttural words like the s-bomb, the a-bomb, the h-bomb, and the ultimately low-brow, j-bomb. Combine them in a sentence, verbing some, nouning others, tossing in the rest as adverbs and adjectives, and viola! One suburban intellect was born, but only if he used the f-bomb with frequent (and by frequent, I mean as often as an Englishman drinks tea) and common parlance. In other words, to use the f-bomb properly, it had to sound natural, unforced and ordinary. Practice helped.

To really say it all well, a speaker needed a beer in the right hand helped, using the left to make whatever absurd point needed to be made. When I was a freshman, Reagan was in office, and the university dialect, in proving itself ‘thinking’, required an anti-Reagan overtone, with a few snips about Republicans. Of course, being from the southwest suburbs, where being a Democrat was not a choice, but a blood borne infection the entire population embraced (free speech and all enabled all of us to conclusively arrive in the same place politically), I found no issue at all joining the university’s Blast the Republicans Party.

A week into school, once September hit, I settled down and really learned what it was all about. My poetry teacher explained she slept with various poets, including Robert Bly. A Marxist literary analysis professor assured us his way was the only way, though my Eckankarist writing professor said otherwise. The philosophy professor, in absolute certainty, blurted out how there was no certainty at all, and that Christians, above all, were idiots. He was a Unitarian.

The f-bomb, I quickly realized, was more of a Greenwich Village intellectuals word. It really was not meant for those who knew other words. We bragged about our liberal minded thinking while dismissing the rest as cretins, or, as we liked calling them, conservatives. What did it matter that we attended Farm Aid while the conservatives were often the actual farmers? Who cares? We were rocking with Willie Nelson. He used the f-bomb, and look at him, speaking against things.

I continued to use the f-bomb, though I wish someone had protested this bomb as well. I was in over my head when I encountered a guy who told me what was needed wasn’t a protest, but action. I was a defiant pacifist, and told him so.

How do I, a young and brilliant poet trying to show off my verbal chops, explain to someone the elucidated light of liberalism?

I sure showed him some argumentation there. Freedom of speech. Used every word I knew.

The guy I argued with left me without a word and headed to the homeless mission to volunteer with his church while I stayed around to argue some more about poverty and the masses.

And there went the bomb.