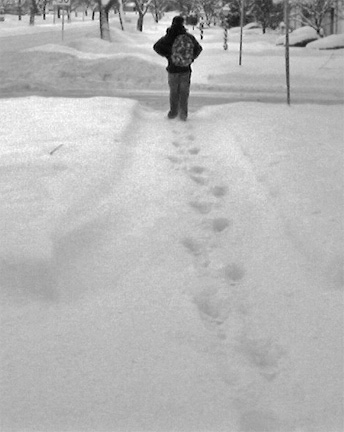 Visions of a Snowy Morning: Workaday Joes Filing By My Window One-by-One

An essay looking at my hardworking neighbors en route to their next stop in their commute. It is both lonely and hopeful, as they trudge on a gray day looking forward to better days. First published January 2010. Now, in the heat of June in the South, I smile at the snowy days my friends endure.

I looked through the window, and saw them passing by, those people who live in the homes around me. The sidewalk this morning had a path of neighbors stepping in a suburban linear regiment. Each one, walking. Footprints in the snow. Coffee in hand, bag in the other, like quiet soldiers without guns. Or students, sans coffee, with backpacks bigger than parachutes, but not as buoyant. Their day would be filled with factory floors, or cubicles with short walls. Or driving something, pushing snow, delivering packages or people. Or in classrooms, surrounded by sniffles, wet socks and struggles to remember fractions.

Typing, calling, affixing, packaging, shipping. Whatever the pay, whatever the skill, the job’s the job. It is not the beach, the woods, the theater, or the dinner under candlelight. Punch in/punch out, or work all day for a salary, few are not slaves to some kind of clock. Time is money, so they all sell their days for a loaf of bread, shoes, pants and a shirt. Water is still free, more or less, if they know where to look.

Each walked toward something the same, independently yet as one congregation. Protesting nothing, catholic without a pope, unified, global, universal, though unknowing their connection. Their religion was to get through the day, not to get through to God, but God still watches and loves them. Some know this, but it is hard to tell which own which heart; each looks the same with massive black jackets, dark pants and boots, silhouetted against the streetlights leftover from the night. They press on because it is not today they see, but a sunny day in July. Then, the schools are out, or they have vacation, or, they just don’t mind the walk any longer, leaving no footprints in my sidewalk.

The whiteness of the snow is offset by the overcast of an unfriendly January sun and eyes not ready to open. The coffee will seduce the eyes into seeing the gray skyline, and the workday will start soon. Better days will come as the snow melts and the days lengthen, but for now, this is their lot. This is a morning; this is today.