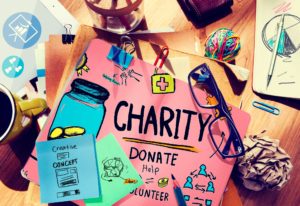 Bill Gates and Warren Buffett both are giving away oodles of money. They are so rich they needed to set up foundations to help sort all of it out.

Jeff Bezos I think will eventually figure out he can’t spend it all and give away legendary amounts. At the moment, he’s worth $145.1 billion. Forbes earlier this month put him at $160 billion. No matter how lavishly he lives, he’s living below his means.

I have clients who give away millions of dollars each year. They work hard to give wisely and behind the scenes. My job is to help them encourage others to do likewise.

Sure, the famous and wealthy can reach places you cannot, but, in turn, you can do things they cannot. Money and fame, just as the absence of either, limit.

You, the impoverished unknown like myself, can have conversations with people without being recognized as famous, or the expectation we will buy out their troubles. Mr. Gates is inescapably recognized and this surely gets in the way of having sincere, vulnerable conversations.

We (you and me) can do little things directly. I don’t expect Mr. Buffett to get out of his car and push when he sees one broken down. I expect, instead, that he calls a towing company and fronts the bill. That’s good, but there’s something to be said about pushing a Corolla side-by-side with a guy you never met a block up the street.

Don’t “pay it forward.” Do good things because they are good. You aren’t repaying someone. There’s no quid pro quo to goodness, despite what the

wants you to think.

You aren’t giving to get.

is wrong, even within his own faith. Give as purely as you can without expectation of return. That’s not easy. Dear old Benny would have you think that if you give to his organization, you’ll receive some remuneration as a result. I pick on him, but it is a secret hope of many of us.

Instead, give because you believe your giving can, even in the smallest way, improve something.

That’s complicated. I’m questioning my own motives even as I write this. Am I doing it to look good, that some favor will come back to me? I hope not. I’m trying not to second-guess, but there it is. I am hoping at least one person will do some kindness they might not have.

My fellow writers, even those just beginning, can help the underemployed with resumes and cover letters, or help a struggling nonprofit with newsletters and websites. Or help a widow write Christmas cards. You get the idea. It isn’t about what you’ve been given. It is about what you can do.